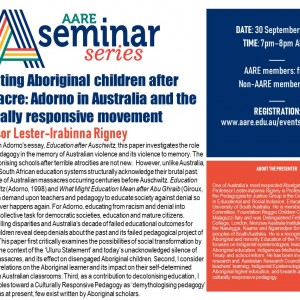 Educating Aboriginal children after massacre: Adorno in Australia and the culturally responsive movement

Drawing upon Adorno's essay, Education after Auschwitz, this paper investigates the role of teacher pedagogy in the memory of Australian violence and its violence to memory. The call for decolonising schools after terrible atrocities are not new.  However, unlike Australia, German and South African education systems structurally acknowledge their brutal past. This is in spite of Australian massacres occurring centuries before Auschwitz. Education after Auschwitz (Adorno, 1998) and What Might Education Mean after Abu Ghraib (Giroux, 2004) place a demand upon teachers and pedagogy to educate society against denial so Auschwitz never happens again. For Adorno, educating from racism and denial into equality is a collective task for democratic societies, education and mature citizens. Present appalling disparities and Australia’s decade of failed educational outcomes for Aboriginal children reveal deep denials about the past and its failed pedagogical project of the present. This paper first critically examines the possibilities of social transformation by schooling in the context of the ‘Uluru Statement’ and today’s unacknowledged silence of Australian massacres, and its effect on disengaged Aboriginal children. Second, I consider these power relations on the Aboriginal learner and its impact on their self-determined agency within Australian classrooms. Third, as a contribution to decolonising education, I outline principles toward a Culturally Responsive Pedagogy as ‘demythologising pedagogy’ for teachers as at present, few exist written by Aboriginal scholars.

One of Australia’s most respected Aboriginal educationalists Professor Lester-Irabinna Rigney is Professor of Education in the Pedagogies for Justice Group in the Centre for Research in Educational and Social Inclusion, Education Futures, University of South Australia. He is member of the Scientific Committee, Foundation Reggio Children Centro Loris Malaguzzi Italy and was Distinguished Fellow at Kings College, London, Menzies Australia Institute. He is a citizen of the Narungga, Kaurna and Ngarrindjeri Sovereign Nation peoples of South Australia. He is a recognised expert on Aboriginal and minority Education of the Pacific. His research focuses on Indigenist epistemologies, teachers' work, Aboriginal education, Indigenous Intellectual Sovereignty, Treaty and school reform. He has been involved in national research and  Australian Research Council funded projects on teachers' learning; Indigenist Epistemologies and School; Aboriginal higher education; and towards an Australian culturally responsive pedagogy.

To register for this event

« Back to Events Calendar Add this to iCalendar