Some of the richest and most powerful individuals and corporations in Australia are involved in educational philanthropy – giving money to public schools via foundations. Education philanthropy represents a powerful network from diverse sectors including political, business, corporations and media.

This is framed to the public as charitable acts, and wanting to ‘give back’. But we need to ask questions: who stands to benefit? Who has the power to direct large-scale policy? What are the implications for democracy, social justice and equity?

Philanthropy in education presents clear ramifications for transparent democracy and government, in addition to the funding of public schools, and the commercialisation of schools. As a public, do we welcome corporate funders in our public school sector, and what are the wider implications of this?

This is venture philanthropy, wanting something in return. It is strategic and organised; partnering rather than giving.

This could be policy influence, tax minimisation or the generation of profit for your business. This is what Bill Gates described as ‘creative capitalism’—a third-way approach ‘where governments, businesses and non-profits work together’. Venture philanthropy is investing, not simply granting. It aims to be entrepreneurial, high-impact and high-engagement.

Venture philanthropists aim for two primary strategies: first, to act as a type of ‘boundary spanner’, linking together a range of actors from NGOs, governments, corporations, intergovernmental agencies and business. Second, establish ‘knowledge brokers’ or ‘evidence brokers’ to leverage authority with the public and achieve large-scale reform.

How is this happening in education? Venture philanthropy is wide-spread in the US and the UK.  It rests on claims of altruism, whilst simultaneously generating profits and significant influence in education reform (surveys with educators show that the majority believe, for example, that the Gates Foundation is more powerful than the US government when it comes to education reform, and in their successful backing of numerous policy agendas, such as charter schools or the Common Core Initiative- they would be right).

We have to ask ourselves—is corporate-backed education reform a good thing? Do we want corporations to be more transparent in how they are driving large-scale policy and directing education reform? These large-scale reforms, as enabled by ‘big money’, are often enacted through ‘foundations’ which claim they are motivated by improving equity in education. In other words, the influence and the money trail is often not very easy to trace as they hide under subsidiaries or ultimate holding companies.

This is a short post which will only provide a brief introduction (the fuller length version is published in a peer-reviewed journal). Let’s consider just one example: the emergence of Australian Schools Plus, the first nation-wide charity with Deductible Gift Recipient Status, that enables corporations, businesses and high-net wealth individuals to give to public schools and receive a tax-deduction.

Philanthropy in disadvantaged public schools was first recommended (in a significant way) in the Federal Review of Funding for Schooling (recommendation 41). The Gonski Review called for reform that would emulate models from the UK and the US, where academy schools and charter schools partner with philanthropists to lead ‘systemic improvements’. This recommendation was driven by venture philanthropic organisation Social Ventures Australia and supported by others (e.g. The Ian Potter Foundation, Origin Foundation – Origin Energy).

The Report colloquially became known as the Gonski Review, in light of the chairman of the report – the ‘most well-networked business man in Australia’, corporate consultant David Gonski. Gonski is a well-known and long-term political advocate of corporate philanthropy, having sat on senior advisory boards for the Howard Government in the 1990s and early 2000s. Gonski was highly influential in ushering in high-level reform in this area. He is also the co-director of Australian Philanthropic Services ((according to current ASIC records, APS is a subsidiary of venture philanthropic organisation Social Ventures Australia– a central lobbyist for education reform. Please note that SVA stipulate that this relationship ended in 2017).

In the review’s advocacy for increased funding for disadvantaged students, the policy document became well-known and the broader public came to associate Gonski with educational equity (e.g. #igiveagonski).

But one of the most enduring policies Gonski 1.0 has implemented is the introduction of corporate-backed funding of public schools, unclear money trails and questionable policy influence by ‘big money’. The following is a timeline which shows the key stages:

Table 1. A timeline of key events.

The federal legislation- which set an historical precedent – received very little media coverage, and none that was critical, questioning or investigating. It is overwhelmingly regarded positively that corporations, business and high-net wealth individuals can give to public schools. Arguably, giving to public schools is positive–but what is the price? It is important to note formidable influences in modern education policy in Australia.

Philanthropic organisations such as Schools Plus host a wide range of hybrid market-state actors across corporate and not-for-profit organisations, including board members from News Corp Australia and Foxtel (as part of the Murdoch empire), a former CEO from Deloitte and elite sporting groups (an AFL Football Club). Their financial supporters have deep pockets: Google, Toyota, Commonwealth Bank, Tim Fairfax Family Foundation, Origin Foundation (from Origin Energy), retail giants (Harvey Norman) and many more (note, this lists 2020 funders).

The following visual endeavours to illustrate just some of the donors: 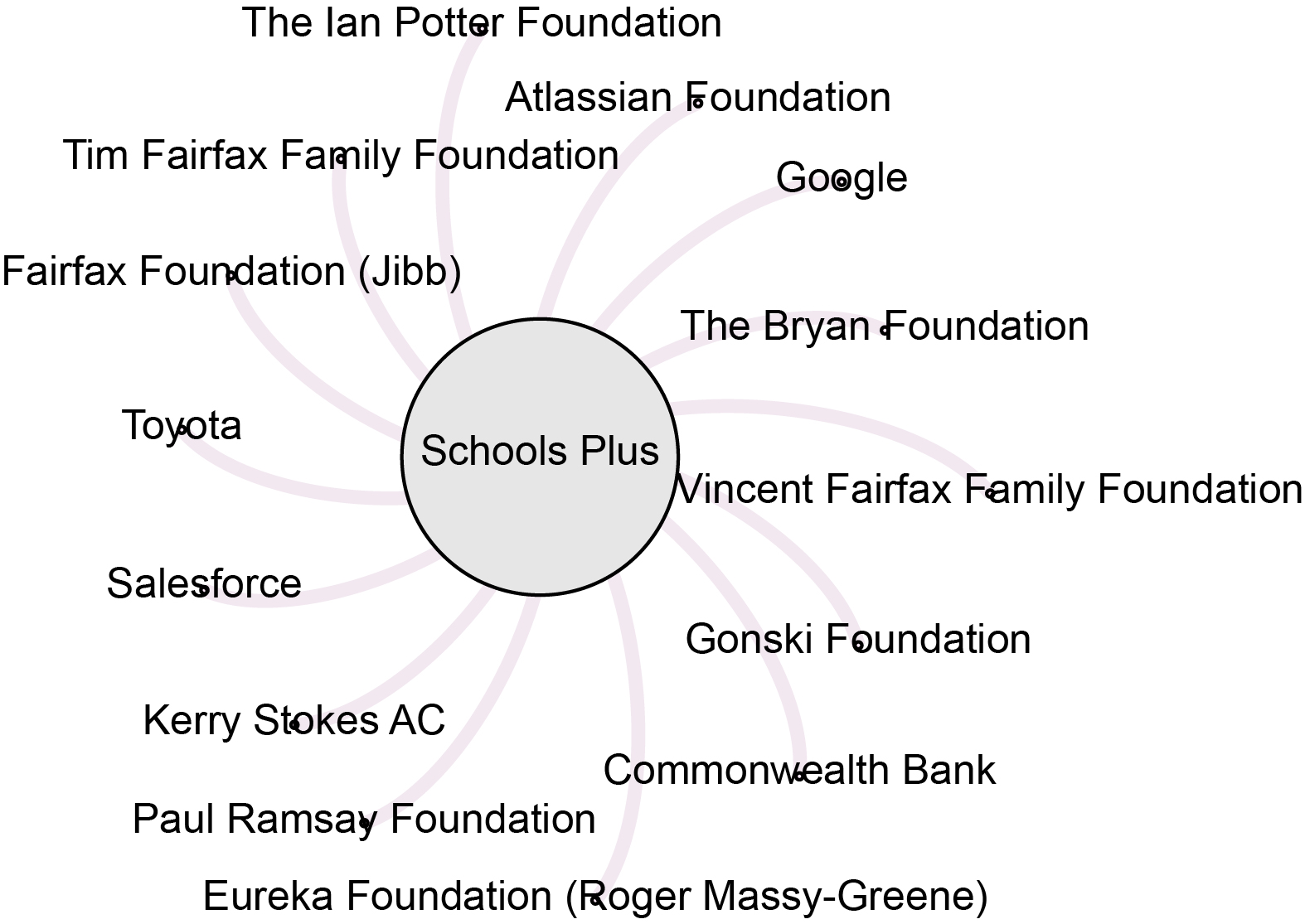 A picture of Schools Plus and a snapshot of their high-profile donors, representing the wealthiest in Australian society.

Effectively, each node represents a high-level of power from corporate, philanthropy or the government sector. The networks are characterised via reproductive values; and relational patterns and replications are evident across the network. Gonski’s professional and personal network is reproduced throughout the Schools Plus network; this includes banking giants, media oligarchs, and the wealthiest identities. For example, Gonski’s mentee Catherine Brenner, the former Chair of the AMP Bank, occupies a board role for Schools Plus. Major power-brokers are represented in the network: Roger Massy-Greene, ex-Bank of America and Rio Tinto CEO, political party donor, married to Belinda Hutchinson (co-director of Australian Philanthropic Services and long-term funder of Social Ventures Australia), is part of the Pioneers in Philanthropy (and a newly formed member of the ‘expert board’, and Director of AERO). Kim Williams is a former executive from Rupert Murdoch’s Foxtel and News Corp. The CEO of Schools Plus is a former corporate consultant from Deloitte (one of the big four).

Schools Plus is closely aligned with Social Ventures Australia (a venture philanthropic organisation). Their first CEO was Michael Traill, the CEO from SVA. Their prior registered address was SVA’s address. SVA were described as the ‘driving force’ behind setting up Schools Plus. There are similar people who hold roles. For instance, former board member of Schools Plus (Lisa Paul AO) is also the former director from SVA (this is common, including the newly formed AERO– many of the directors are former/current SVA directors). The face of these organisations tends to be far different to the engine (money) that is driving it. The big-name donors are also common throughout this network. This includes Google, Origin, or Commonwealth Bank (all donors to Schools Plus and SVA).

As an organisation, SVA have pushed forward major education reform, including Schools Plus, Bright Spots Schools Connection, the Australian Education Research Organisation (AERO), and Evidence for Learning (a subsidiary of SVA). There is a capacity to influence high-level reform, including federal legislation. But, this is coupled with a lack of formal responsibilities or bureaucratic transparencies. It is undemocratic. There is a concentration of power within particular institutional affiliations.

It is important to note that the median tax that corporations pay in Australia is 1.64% (when analysing data from 2014 to 2019). This is because corporations offset their taxable income by giving to a range of foundations such as this– rather than paying tax to the government (which would then be distributed to public services). It is a win-win for corporations – they get to choose where their funds go – get ‘free’ company branding – win contracts from the government – get their product into schools and classrooms – and can claim corporate social responsibility as well!

This post is a preliminary and does not pretend to answer all the questions. I would encourage more scrutiny of organisations and foundations that influence public schools and public schooling policy. They will influence how public schools are funded, what kinds of products will be included in the public school classroom, and are influencing policy in schools, at state and federal level.

Emma Rowe is a Senior Lecturer in Education at Deakin University and 2020 Fulbright Scholar. Emma is a recipient of the Australian Research Council Discovery Early Career Researcher Grant (DECRA) 2021-2024. Emma’s work examines educational reform and education policy, with an interest in  school choice, privatization and marketisation. Emma’s work has held a long-term interest in the reform of public schooling across OECD countries.

This was written with the support of an ARC DECRA

5 thoughts on “Who stands to benefit? We all need to know”